The conference programme promised a varied group of speakers who presented to a packed house at Irwin Mitchell in Holborn, central London.

Why is integrated care important after brain injury?

Dr Mike Dilley is a Consultant Neuropsychiatrist in Neurorehabilitation and his introduction lay out the difficulties he has encountered while trying to access the right care for someone with an ABI. The account of his tribulations set many heads nodding amongst professionals in the room. I confess that it was perversely reassuring to find that a practising Neurophsychiatrist had also found the process frustrating and laborious. I had tried to access mental health services both privately and through the NHS when struggling with my injury, only to retreat baffled and exhausted.

Dr Dilley noted that the recent increase in awareness and discussions of mental health in wider society is certainly a good thing and that increasing access to care is also very possible. But he noted that not everyone needs the specialised services which are already under strain. The question he identified was how to manage this access. As I understood it there is not currently an integrated ‘triage’ system which determines the best care for someone’s needs and nor which case has priority.

While the early part of Dr Dilley’s talk described the problems for those trying to access desperately needed services, the second part offered. His team have been piloting a system which has focused on integrating care across departments in his hospital. The pilot is still underway but early evidence has shown dramatic improvements in both the access to and a reduction in cost of caring for patients with an ABI.

Our next two speakers were both Directors of Rehab Without Walls, a team of specialists in Brain injury case management -http://www.rehabwithoutwalls.co.uk

Ms Cathy Johnson called on her 20+ years of experience when speaking about the links between Brain Injury Case management and Mental health. She noted that early in her career ABIs were considered to be ‘a young man problem’ as a result of over exuberance in drinking, sport and fighting. However, Ms Johnson reported that the rate of ABI among young woman has nearly caught up now.

Throughout Ms Johnson’s talk it was clear that the consequences of ABI on mental health are evident but also, she suspects, underreported. 40-60% of people with ABI report depression in the months after their injury. The reasons are varied but are likely to be a combination of lifestyle changes as a result of the injury e.g. loss of job or relationships. The person could also be grieving for the loss of self and of future plans.

Ms Johnson finished with a request for all of us present to be aware of the prevalence of ABI in the criminal justice system. There have been several papers recently, such as ‘Time for Change’ a report by the All Party Parliamentary Group on ABI, which show that the prevalence of ABI among those in custody is far higher than in the wider population. This segued neatly into the next presentation given by her fellow director at Rehab Without Walls, Dr Neil Brooks.

Dr Brooks is a consultant neuropsychologist who chose to speak on ABI, frontal Lobe damage and mental capacity. We delved into the realm of case law with heavy references to the Mental Health and Mental Capacity Acts. I confess that this was all new to me and provided a fascinating window into the life of police, lawyers and social care workers. How do you decide if a brain injury has rendered someone incapable, especially as it may have affected one area of their brain and/or abilities more than any other? The answer is clearly ‘get a professional opinion’.

Noushin Pasgar was our final speaker and she gave an inspired talk about living with her ABI which was acquired at birth. One point that hit home with me was:

“The world is still uneducated in employing someone with mental or physical disabilities.”

Noushin related experiences with employers which flirted with, or possibly even broke, the disabilities law. She has a drive to change this and other mis-understandings about ABI which led her towards a Mental Health First Aid course. Noushin is now certified with MHFA who train people and company’s in Mental Health First Aid. https://mhfaengland.org

Noushin is also involved with Headway West London and their pilot collaborative Health and Well-Being Programme with Chelsea FC Foundation. This is an initiate to help those with movement difficulties following ABI to exercise regularly. This is a great idea as sometimes it can be difficult to follow or keep up in an open fitness class and exercise is a key help in ABI treatment and recovery. Finally, Noushin left us with an inspiring phrase to finish the conference:

“The only disability in life is a bad attitude”

This article is not a complete record of the conference, please see the ABIL website for more details - http://www.abil.co.uk/category/news/ 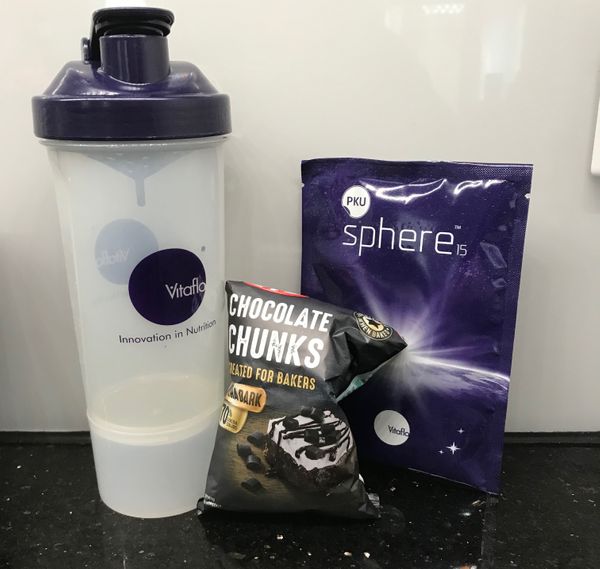 With the new chocolate Sphere flavour out from Vitaflo I decided to see if I could fit this into my diet - see here for the first installment. How did I do it and what happened?

Various groups from across London who work together to raise awareness of Brain Injury and to press for care services.